What you need to know to make audio video over IP as good as solid state.

There are many reasons why people prefer to transport audio/video signals over a digital network or #AVoverIP.  However, before abandoning conventional A/V routers, switches, coax cables, and amplifiers, let’s look at the basics of digital audio/video and transmission and your optimal options.

Can you fully emulate your SD, HD, 4K or 8K video over coax with a digital solution?  Yes.  But at what cost?  What are the additional benefits? What are the “gotchas”?  Can you afford it?

There are three categories for networks that support A/V over IP:

The ubiquitous “Internet” obviously delivers audio/video.  Whether you are viewing via Discover Video’s DEVOS, Arcus, or consumer-focused entertainment via Sling, Hulu, Netflix, Amazon, or others, you can easily send live and on-demand video over the public Internet.  But the public Internet use is limited by the access speed you and viewers have paid for, and there is very limited quality of service.  You probably would not even think about trying to send live video at 4 Tbps over the Internet.  Typical streaming speeds range from 100 Kbps to 100 Mbps, with about 2 Mbps as the sweet spot.

A private network does not have the access limitations of the public Internet.  Typically, you have 10, 100, or 1000 Mbps connections internally.  So a company can easily deploy a video system to deliver live and on-demand content to all employees without too much concern.  However, all networks have limits and the corporate network runs vital business services.  Again, sending a video at 4 Tbps (4,000 Gbps) could easily affect overall network performance.  But sending video at more reasonable rates is rarely a problem.

To be clear, a 2 Mbps video stream consumes exactly 2% of a 100 Mbps Ethernet port.  Consuming 100% of bandwidth would be a bad idea.

Running a parallel, dedicated A/V network is not out of the question in some cases.  In essence, you are replacing coax cable with Cat 5/6 cable, lowering costs, and increasing flexibility.  But you need to need it.  And if you intend to send uncompressed, high resolution video over Ethernet, you will look to such a solution because Ethernet switches can be less costly than A/V switching and routing equipment.  But it may be misleading to call this “A/V over IP”.  While technically correct, it may imply interoperability that is not present.

Now that you’ve picked the best network for your AV, consider how you encode, compress, delay, and send that signal, as well as how it is received.

The first step in A/V over IP is to convert the video into a digital bit stream.  There are three things that must be considered:  resolution, frame rate, and bandwidth or bit rate. 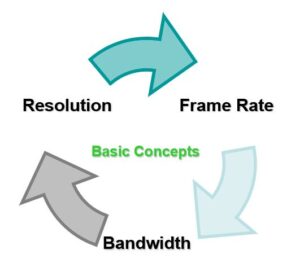 But you don’t transmit pixels, you transmit data.  To represent each pixel you typically need at least 2 bytes (8 bits) of data.  For our SD video, that would be 147,456,000 bits of data per second, or over 147 Mbps.  The numbers quickly get bigger for higher resolutions:

As you can see, resolution and frame rate has a dramatic affect on the amount of data that must be transmitted.  Cutting the frame rate in half will half the bit rate.

Almost all video has highly redundant information.  That is, it is very compressible using what is called “lossy” compression.

Unlike a Zip file where you get back exactly what you put in, video compression removes information forever.  Of course, the information removed must be unnecessary to reconstruct the image. This is why video compression is called “lossy”, and why it can appear to efficient.  After all, a DiscoverVideo live stream encoder can produce a good quality HD video at 1 Mbps.  Using the above chart where uncompressed HD video would require 1,000 Mbps, this is an impressive 1000:1 ratio!

But all compression comes with a cost.  There is a loss of resolution, high motion may produce artifacts, and there can be a noticeable delay between the source and the ultimate playback.  The question is simply how much delay? How many artifacts? How much resolution?

The most popular and most compatible compression today is MPEG-4 Part 10, or H.264.

Some AV-over-IP solutions use JPEG2000 or DCT-only technology to reduce overall delay to near zero.

But these solutions operate in the 1 Gbps range, putting them out of reach for mainstream use.

Delay is the human perception of a technical characteristic called latency.  We will use the term “delay” here.

In the vast majority of use cases, some delay simply does not not matter.  Certainly when you watch live breaking news, you want to know what is “now” and not have a delay of hours or days!  But a delay of several seconds is not a concern, especially since you cannot witness what is really “now”.  On the other hand, delay seems to bring nothing of benefit to you, so you would rather have no delay than have any delay.

Delay can bring value to the viewing experience on the public Internet, since periods of packet loss and dropouts can be hidden from the viewer by having enough data buffered in at the client.  Combined with ABR techniques, this is how commercial VoD services like NetFlix operates.

DiscoverVideo’s system can be optioned to deliver live video a very low delay, both by minimizing client buffering and though using certain low-delay protocols that are supported by the DiscoverVideo servers and players.

But suppose you want to display multiple TV screens in a room and they all show the same live video.  Here, delay would cause audio echo effects and viewers would be distracted by the delay between each screen.  For these cases, A/V over IP using uncompressed, or lightly compressed, is used to provide a near-zero delay.  But as illustrated above, you will be using very high data rates and you will probably require a dedicated network.

To send A/V, you will need an encoder.  Remember that everything is part of a system — your encoder, network, and target receiver/decoder must together produce the desired result.

Present your video and audio source to the encoder via HDMI, SDI, Component, DVI, VGA, CVBS and configure your encoder for desired rates.  Your encoder might send the encoded bitstream to a destination (such as a server or a receiver), or it might have a built-in server in which case receivers must get the stream from the encoder.

Receive the live bitstream from the server that the encoder is using, or directly from the encoder.  Your receiver might be a web page player (DEVOS, Arcus), a stand-alone player application (DVPlayer for Windows, Multi-Player for iOS and Android), a Digital Signage player (SignStick, MediaPlayer), a Set Top Box, Roku, or one of hundreds of compatible devices.  For uncompressed or lightly compressed high rate video with low delay, your sending and receiving choices are more limited and vendor specific since there are not universal followed standards.

If you’ve read this all the way through and would like further guidance for your business, school, or offices, please get in touch with me, Rich Mavrogeanes at (203) 626-5267.